Heavy and Whipping Cream Are the Same Thing . . . Right?

To those of you who’ve been forced to choose between heavy and whipping cream at the supermarket, you’ve probably pondered it yourself: isn’t all cream more or less the same thing?

Not exactly. There are differences in milk-fat content. All cream contains at least 18 percent milk fat: “whipping cream” is made up of 30 percent, while cartons labeled “heavy cream” or “heavy whipping cream” must contain 36 percent or more. Whipping cream, heavy cream, or heavy whipping cream all work for recipes that incorporate whisked air, but don’t reach for that half-and-half; at 10.5 to 18 percent milk fat, it simply won’t cut it. The more fat content a cream contains, the more stable it’s likely to be in a whipped state. Check out this honey whipped topping recipe for guaranteed success.  (not tested by Mary’s)

Whipped cream is one of those basic recipes that requires a little bit of patience and a watchful eye, but with some practice, you’ll be whipping together billowing dollops in no time.  Some use a stand mixer, but because whipped cream is so time-sensitive, many prefer a hand mixer. It forces one to keep an eye on the foamy alchemy taking place in the bowl. When the whisks start to leave tread marks behind in the cream, that’s a sign that the whipped cream’s less than a few minutes away from being done. Rather than calling for powdered sugar, this particular whipped cream is sweetened with honey, which imparts a floral aroma and flavor 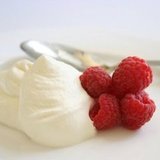